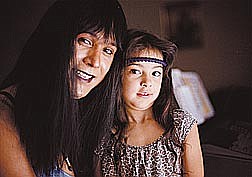 Ric GunnGale Revilla and her daughter Morning Star stand near the keyboard set up in the living room of their Carson City townhouse. Revilla is among the five finalists for the Native American Music Awards.