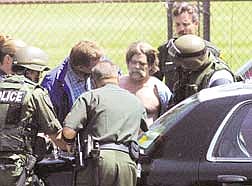 Suspected gunman Larry Peck, center, was taken into custody in Reno after allegedly killing a Reno police officer Wednesday morning. Peck surrendered after SWAT officers stormed the home he had barricaded himself in for four hours.