Virginia City boardwalk bustlin' for Christmas on the Comstock 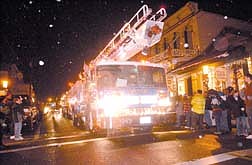 The Virginia City Fire Department was just one of the particapants in the Virginia City Christmas Lights Parade as hundreds of spectators braved the cold weather and snow. Photo by Brian Corley