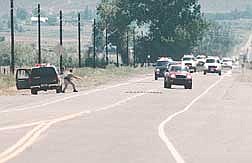 Photo by Belinda Grant.A Douglas County sheriff&#039;s deputy deploys a spike strip on Highway 88 in an effort to stop the red truck. The driver swerved around the strip and continued into the Ranchos.