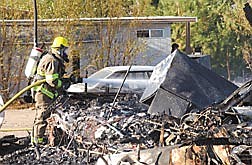 Brian CorleyA firefighter sprays water on a house in Silver Springs after it burned to the ground.