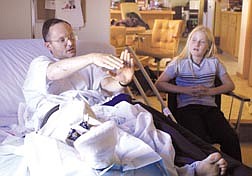 Carson City pilot Dr. Kevin Jensen describes his descent into an Apollo Dr. backyard on Saturday night, as his daughter Karen, 11, looks on. Jensen suffered a broken right leg and his wife Lois, extensive bruising. Resident Bob Griffin suffered broken legs when the aircraft landed on him in his backyard.