'Get on with the show,' Lompa family says about freeway project 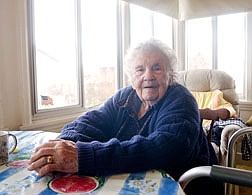 Eva Lompa sits in her kitchen, where she will have a view of the bypass along Fifth Street, Saturday. Lompa sees the bypass as signs of a growing city but feels the State is not dealing fairly with them in negotiating a price for their land which the family has owned since 1936. Photo by Brian Corley