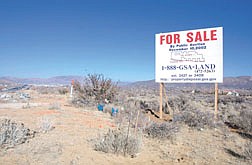 Depsite ongoing controversy, the Bureau of Land Management is schoduled to auction the property on Highway 395, across from the new Wal-Mart, for commercial development on Dec. 10. Douglas County commissioners will address Carson City&#039;s protest of the auction during their regular meeting on Thursday.