Showdown ahead on right to bear arms: an individual or collective right? 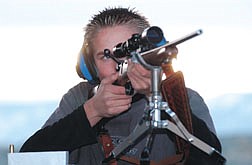 Tristan Hein, 14, practices target-shooting at the Carson Gun Range Friday afternoon. Tristan and his father Greg have tags and are preparing to hunt deer in Gerlach.