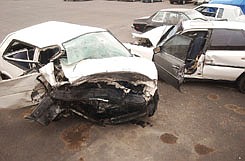 The passenger side wheels of both a Toyota Carolla, left, and a Toyota Camary were left in the passenger side seats after the two cars hit at around 3:30 Tuesday morning. All three people involved were killed in the accident that happened just east of Stagecoach. Photo by Brian Corley