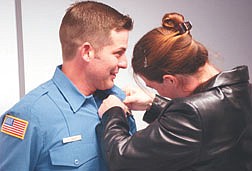 Shayne Reed has his Carson City Firefighter&#039;s Badge pinned on by Andrea Morton at the Lawerence Jacobsen Regional Fire Training Facility Friday. Reed was one of fve graduates that will go to work for Carson City or North Lake Tahoe in the first ever graduates from the facility that traitionally focuses on retraining current firefighters. Photo by Brian Corley