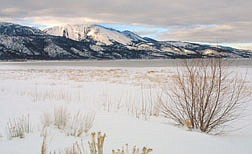 The skies around Mount Rose cleared Monday afternoon over Washoe Lake. The holiday weather for Northern Nevada area is expected to be cloudy with a 20 percent chance of snow showers.