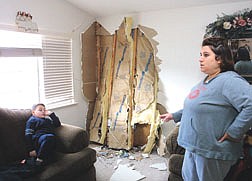 North Ridge homeowner Jami Mosbacher shows the damage left behind after a vehicle careened into her home Monday morning. Her son Christian, 5, frequently plays in that corner of the living room, Mosbacher said.