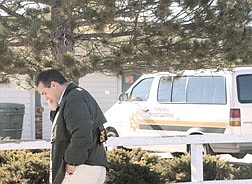 Carson City detective Jim Primka talks on a phone after a search of the home of Sami Donovan. Donovan was accused of several felony charges for selling property thousands of dollars which didn&#039;t belong to her over internet auction sites. Photo by Brian Corley