Greetings from the other San Jose 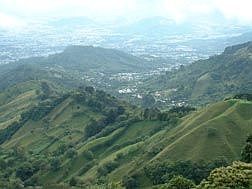 Similar to Carson City, San Jose, Costa Rica, is surrounded by mountains. But because of the high amount of rain the area gets, the mountains are a lush green instead of blue.