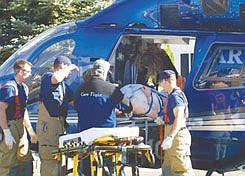 Cathleen AllisonCarson City Fire Department and Care Flight apparently self-inflicted gunshot wound into a Care Flight helicopter for transport to Reno. The man appears to have shot his ex-wife, then self.