Voting is a family tradition for Carson City man 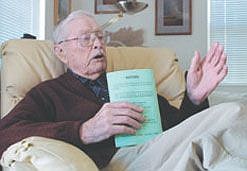 Cathleen AllisonReuben Law, 104, has voted in every election since 1918. He sent an absentee ballot from France that year. Law uses his his sample ballot to help him remember his choices. Law has passed along his strong sense of civic duty to his four children and 11 grand children.