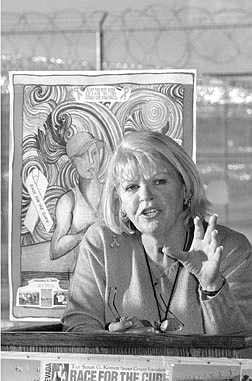 Prison case-worker Pat McGaffin recognized the many inmates and staff in Northern Nevada prisons that participated in the Race for the Cure on Oct. 6. during a ceremony on Wednesday. The six prisons raised $10,500 for the Susan G. Komen Breast Cancer Foundation.