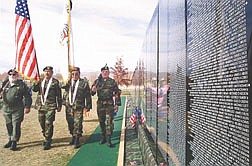 From left, Fred Walliser, Rudy Colderon, Griz Hilpert and Bob White represented the Native Americans who served in the Vietnam War during a ceremony on Wednesday morning at the Rancho San Rafael Park. The Moving Wall, a replica of the Washington D.C. memorial will be in Reno through Veterans Day.