When it rains it pours; Carson City drenched 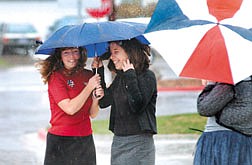 Left to right Michelle Mauer, 14 and Caitlyn Carr, 13, try to stay dry in front of Carson Middle School Friday morning. A strong Pacific Storm is expected to bring precipitation through the weekend.