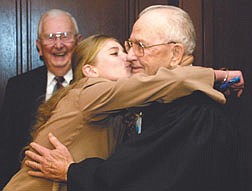 Nevada Supreme Court Justice Cliff Young, right, gets a congratulatory hug from his granddaughter Christia Young, 14, following a ceremony commemorating Young&#039;s retirement after 18 years on the bench. Former Judge Richard Minor, rear, was one of many friends and co-workers that honored Young Wednesday morning at the court in Carson City.