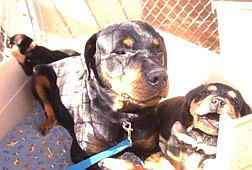 Tom Blomquist found this Rottweiler chained up in front of his yard along with eight puppies. One of the remaining puppies has found a home, but the mother and one other puppy are still homeless. Blomquist provides homes for numerous dogs in Lyon County and is seeking homes for several others. Photo by Brian Corley