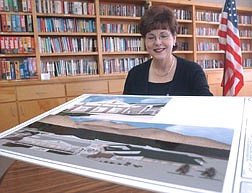 Janice McIntosh sits in the library of the Carson City Senior Citizen&#039;s Center with an artists rendering of the center after it has undergone an expansion. Photo by Brian Corley