Legislature sets up outside smoking room 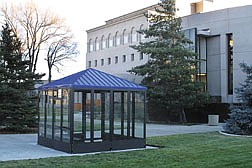 A 10-foot-by-10-foot structure, with at $15,000 price tag, has been built on the north side of the Legislative Building to accomodate smokers.