Shoppers delight in the season, buy out TVs 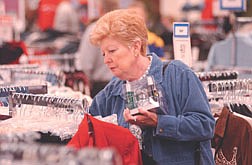 Sandra Rich looks through the clothing racks at Gottschalks Friday. Rich along with millions of others hit the stores Friday looking for sale prices to start the beginning of the Christmas shopping season. Photo by Brian Corley