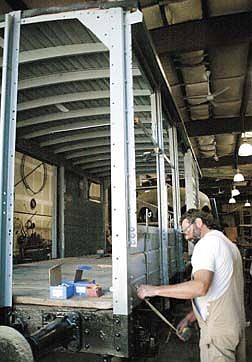 Rick Stiver, a restoration speciatlist at the Nevada State Railroad Museum, works on the Merci boxcar on Monday afternoon. The boxcar was one of 49 boxcars given to the U.S. by France as a thank you for support given during World War II. Years of fundraising and efforts from a group of local volunteers has led to the recent restoration project.