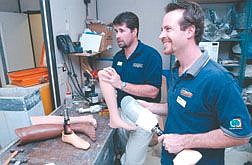 Jay Murray, left, and Mark D&#039;Amico describe some of the Prosthetics which their company, Hanger Prosthetics Wednesday afternoon. The company will send personell and artificial limbs to aid victims of the war in Afghanistan. photo by Rick Gunn