It's allergy time in the Carson Valley 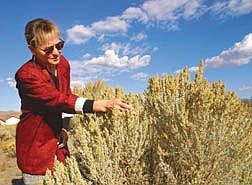 JoAnne Skelly, educator with the University of Nevada Cooperative Extension office, shows the flowers of a sagebrush that release pollen this time of year. Allergy sufferers in Carson City are affected most in the fall.