Nevada Day events get rolling, with the official holiday on Friday 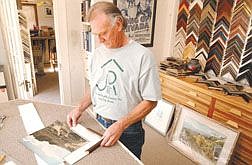 Rick Davis, co-owner of Great Basin Gallery and Frame Shop prepares one of the photographs for the Nevada Day Show Wednesday afternoon. photo by Rick Gunn