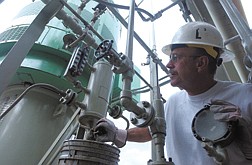 Larry Ledbetter, a plant operator at the Steamboat Springs geothermal plant, lets moisture out of a generator valve at the plant Friday.