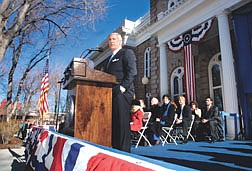 Nev. Gov. Kenny Guinn speaks to a crowd of about 450 people after he was sworn in for a second four-year term on Monday morning, Jan. 6, 2003 in Carson City, Nev.