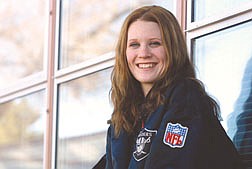 Pioneer High School Senior Laura Dobson, 16, is rallying her classmates to help stop a plan to level the Fleishmann Planetarium in order to build a parking garage.