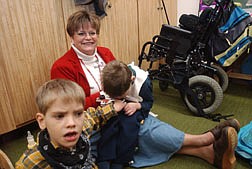 Ellen Boyd, a teacher at Seelinger Elementary School, comforts two of her students, Bradley Pine, 7, left, and Kevin Hinez, 6, during a school lockdown drill. The drill was held during an American Federation of Teachers Union meeting and had been planned for quite a while despite a real lock down in the Sparks area Wednesday. Photo by Brian Corley