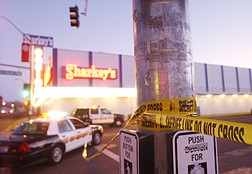 The north parking lot next to Sharkey&#039;s Casino in Gardnerville and the street next to it were blocked off with police tape after a battery that later turned into a murder investigation when the victim died Sunday morning. Douglas County Sheriffs roped the area off Sunday afternoon when they got word off the incident that they responded to intially and made no arrests due to an uncoopertive victim. Photo by Brian Corley