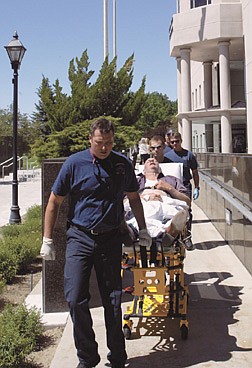 Nevada Assemblyman Tom Collins, D-North Las Vegas, is taken by paramedics from the Legislative Building in Carson City, Nev., after collapsing on the Assembly floor Monday, June 30, 2003. Collins complained of chest pains and will be under observation at Carson-Tahoe Hospital for 24 hours, preventing him from voting on a tax package by the midnight deadline. (AP Photo/Las Vegas Review-Journal, K.M. Cannon)