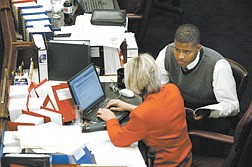 Carson High School Senior Matt McAlman, 18, works with Sen. Barbara Cegavske, R-Las Vegas, on Tuesday on the Senate floor. McAlman has spent the session working as the Senate Finance intern at the Legislature.