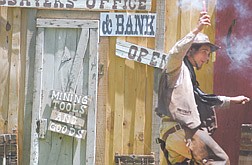 Dan Cole, 22, of Reno, runs into the bank with a stick of dynamite Saturday at Mills Park. Cole plays the part of a bad guy in the &quot;Gunfighters Show&quot; at the Carson Rendezvous.