Protesters debate outside as lawmakers battle inside 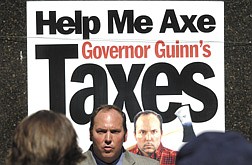 George Harris, founder of the Axe The Guinn Tax Ralley stands in front of a poster with his picture on it during the anti-tax ralley that took place in front legislature Wednesday afternoon .