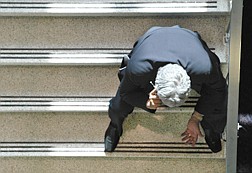 Lobbyist Billy Vassiliadis talks on his cell phone Thursday evening, May 29, 2003 at the Legislature in Carson City, Nev. As the final hours of the legislative session near, the stakes are higher than usual for both lawmakers and lobbyists with record budget and tax decisions on the line. (AP Photo/Nevada Appeal, Cathleen Allison)