Neighbors band together to fight speeders 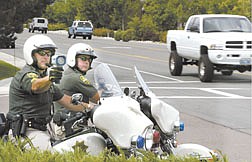 Traffic officers from the Carson City Sheriff&#039;s Department, from left, Sgt. Mike Cullen and Dep. Bill Richards, work the intersection of Winnie and Victoria Lanes on Wednesday afternoon after complaints from residents about ongoing problems with speeders in the area.