Many Americans, Iraqis unsure how road from Sept. 11 led to Baghdad 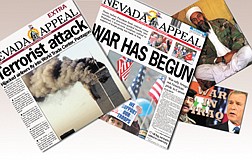