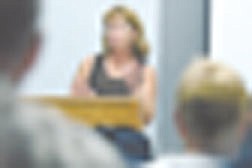 Janet Marson, Occupational Therapist speaks to a group of people about the effects of Methamphetamine and drugs on early childhood development at the Bonanza Room at the Carson Community Center Tuesday afternoon. Photo by Rick Gunn