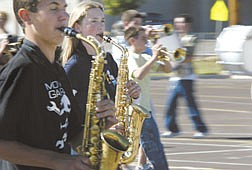 The Carson High School Blue Thunder marching band practices Wednesday afternoon in the south parking lot of the school. A neighbor is complaining of the noise from their and wants them to change either the time or the location of their rehearsals.