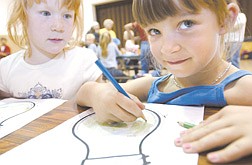 Mackenxie Gilliam, 5, left, overlooks Rachel Machado, 5, as they write the reasons they like the latchkey program at Seeliger Elementary School on Tuesday afternoon. Students across the nation will be sending the light bulbs to government officials in Washington D.C. as part of Lights on After School on Oct. 9.