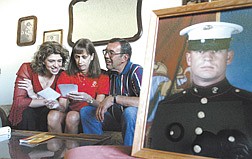 Marine Cpl. Larry Brown&#039;s family look through photos of his welcome home party held over Labor Day weekend after his 7-1/2 month deployment in Iraq. From left, Brown&#039;s sister Karri Couste, mom Sally Brown-Bliss and step-father Dean Bliss, at their Carson CIty home on Wednesday, say Brown will be getting out of the Marines in November.