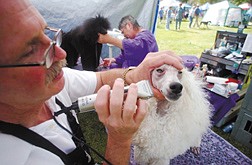 Tim and Margie Sullivan, of Fresno, Calif., groom their poodles Marla, white, and Madison, at Fuji Park Sunday. The Sullivan&#039;s have been showing poodles for 30 years. &#124; Photo by Brad Horn