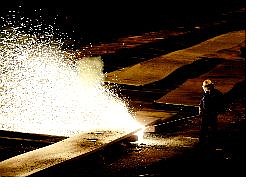 Associated Press An unidentified worker cuts up slabs of steel at International Steel Group, Inc., July 28 in Cleveland, Ohio. The nation&#039;s payroll growth slowed dramatically in July with a paltry 32,000 jobs being added. However, manufacturers, after cutting 1,000 jobs in June, added 10,000 in July.