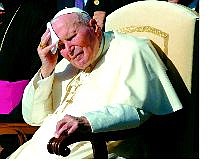 Pope John Paul II towels off before praying at the Virgin Mary shrine in Lourdes, southwestern France, prior to his departure for Rome on Sunday. Associated Press