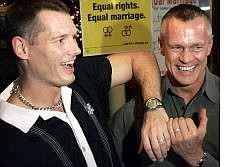 Peter Rex, left, and Steve Martin show off their engagement rings during a celebration of the Supreme Court opinion affirming the legality of same-sex marriage at a Toronto bar on Thursday. Associated Press