Camps cleaning up their menus amid child obesity concerns 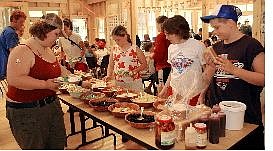 Associated Press Campers at Camp Merrowvista in Tuftonboro, N.H., fill lunch plates from the salad bar July 1. The nation&#039;s roughly 12,000 summer camps are under growing pressure to clean up their menus as parents and public health officials become increasingly concerned about childhood obesity.